For anyone who wants a great professional, free video editor program there is a DaVinci Resolve. For a long time this program has been one of the best color grading software’s out there. It was used on films like X-Men and Tomorrowland (though it was exclusively used for just color grading, not editing). Now they’ve completely revamped it and made it into a full-fledged editor as well. There is a paid studio version (with extra features) in addition to the free version. As any professional video editing software, it has a pretty steep learning curve but if you want something you can eventually use for more complicated projects this might be the best free option out there. 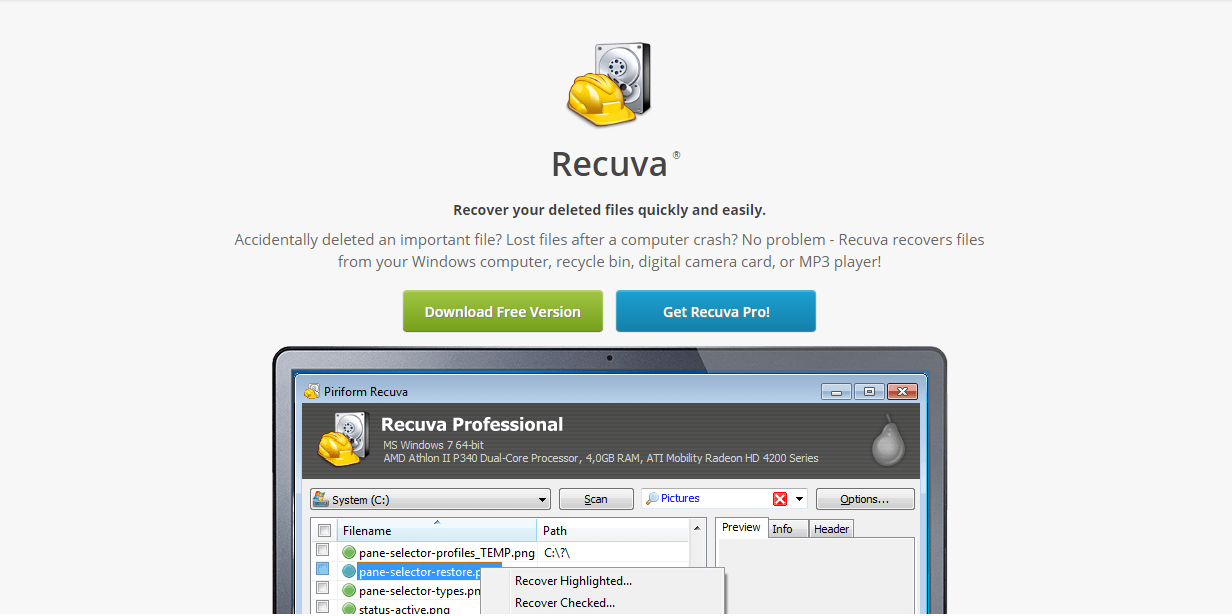 Recuva allows you to recover files on your hard drive that you’ve deleted. The reason this works is when you delete a file on your hard drive, solid-state drive, or thumb drive, the file isn’t necessarily gone immediately. What actually happens is that the block of space the file was taking up has been labeled by the file system as free space. This way it can be used for something else. This means that even after a file has been technically permanently deleted a program like Recuva can still look to see if that file is there and potentially restore it. Obviously, the longer it’s been since the file has been deleted the more likely that something has partially or fully overwritten it, so there’s no guarantee the file isn’t partially corrupted.

Speccy shows your computer’s specs. Compared to other similar programs it just looks nicer, it has a nice simple layout and the information is well organized. On the summary page you can see basic info about the main components or you can dive deeper into each on the left. It will give you more information about your computer than you will ever probably need but you might also find it interesting so you can just poke around check your hard drive health status for example.

LibreOffice is essentially a free alternative to Microsoft Office (Word, PowerPoint, Excel and so on). It’s not quite as feature-rich as the whole Microsoft Office suite but if you’re someone who only uses the basic features of them anyway, LibreOffice is more than capable. Of course, if you need to you can open up and save the same file format that Microsoft Office uses. The word processor called Writer can open and save docx files, the spreadsheet program called Calc can open and save xlsx files. There is also Impress which is like PowerPoint, Base which is like Access for databases, Draw as a drawing program and Math for writing math formulas. This is all cross-platform so if you’ve ever used Ubuntu, you know that this comes pre-loaded as the editors.

Bulk Rename Utility allows you to rename a bunch of files at once in different ways. There are a lot of options, so say you have a bunch of files and all of them with different names and you just want to add a prefix to the beginning of all of them. Maybe you need to change all the files from uppercase to lowercase or even make the first letter of every word uppercase. You can number all the files or remove certain characters from the center of every file name, while moving the first three letters to the end and changing a file extension… 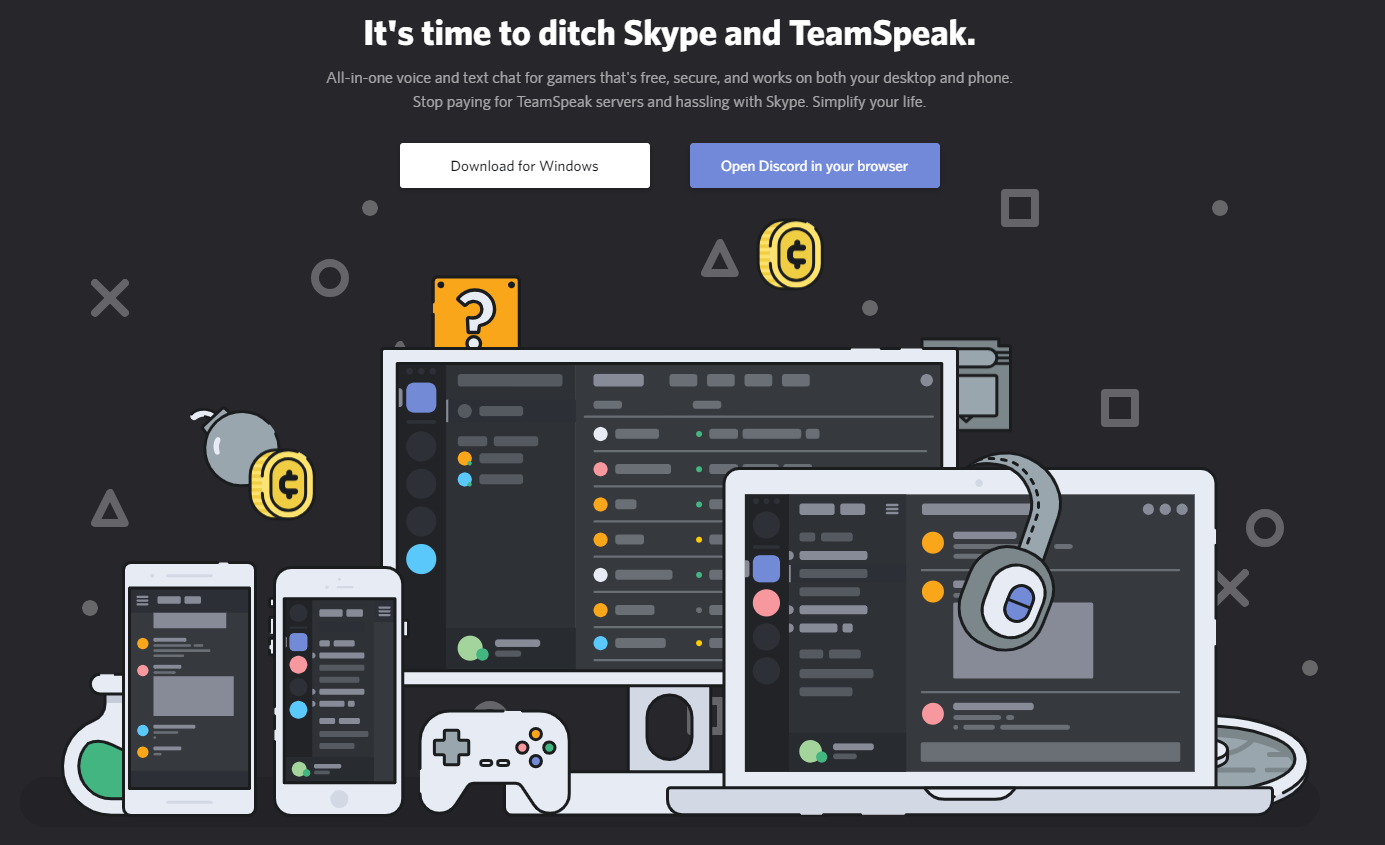 Discord is a VOIP application where you can talk with others using text, voice and video and has other features beyond that. You can set up Discord Servers that are either private or public and within each server you can set up separate channels or rooms, for free. This way you can set up a server for you and all your friends. You can customize them to have different permissions for moderators and set them for different people, make some channels restricted, add custom emoticons, etc. It also lets you share files and images right in line with the chat. There is more to it but you can check the rest out for yourself.

Rainmeter is an awesome program for customizing your computer’s desktop. You can download different widgets, called skins, which sit on your desktop and do anything from showing you the current CPU or RAM usage, or the weather, etc. There are thousands of plugins with all sorts of designs made by different people. There are a few sites that aggregate Rainmeter skins like, Deviant Art, so you should find a few things you like or even make up your own skin.

MediaInfo is a simple program used to shows you all sorts of info about media files, particularly audio and video. For example, you can right-click a video, select MediaInfo option and it will bring up a window with all sorts of stats about that file, like the bit rate of the video, what kinds of video codecs it uses, what audio streams it has, the resolution, the frame rate, etc. It’s not something you’ll use every day but it can be useful like if you download some videos and you want to convert them to smaller files. It might help to know what the current bit rate of the video is so you know how much to change it to reduce the size.

mp3Tag is specifically designed for changing and fixing the metadata for music files. It supports batch tag-editing of ID3v1, ID3v2.3, ID3v2.4, iTunes MP4, WMA, Vorbis Comments and APE Tags for multiple files at once covering a variety of audio formats. Furthermore, it supports online database lookups from, e.g., Discogs, MusicBrainz or freedb, allowing you to automatically gather proper tags and download cover art for your music library. You can rename files based on the tag information, replace characters or words in tags and filenames, import/export tag information, create playlists and more.

f.lux automatically adjusts your monitors colors and brightness at night in such a way so it’s less likely to mess up your sleep. Everyone knows that looking at a computer screen or phones and televisions can make it harder to fall asleep and this is because these devices produce lots of light in the blue wavelength part of light spectrum which your brain thinks is sunlight which is the same color. What f.lux does is remove blue light from the screen and makes it look a little bit more orange. Interestingly a couple minutes after the screen color changes you’ll probably not even notice the difference because your eyes adjust.