Objectives: learn how the Linux system distributions are built and why is modularity important in the World of Linux.

A shell is the interface between the user, applications, utilities and the kernel of the operating system. The shell accepts and interprets commands, and forwards them to the kernel. Commands can be entered either from a command prompt or a script. Without a shell we can’t interface with the rest of the operating system. A Linux shell is comparable to the DOS prompt in Windows. Examples of shells are bash and tcsh. bash (Bourne-Again Shell) is the default and most common Linux shell. It is an enhancement of the original Bourne shell (sh). tcsh is an enhanced version of the Berkeley UNIX C-shell (csh).

Besides applications, we have another types of programs that can run on a Linux system. Those are applications that run in the background and provide additional functionality to the system. We call them Deamons. In Windows OS we typically refer to this kind of programs as services. Examples of Deamons are SMB, LPR, Apache, BIND, Sendmail, ipchains, Squid, etc.

A boot loader loads the Linux kernel from the boot partition on the hard disk, and can be used to boot other operating systems present on the computer. Examples of Linux boot loaders are LILO (LInux LOader), and GRUB (GRand Unified Bootloader).

This whole system is not being developed by one entity, like Microsoft Windows is. With Windows, one group of developers is working on the whole system. In the Linux this is very modular, and we will see that concept in every part of Linux world. In Linux, parts are separated so they don’t rely as much on the other parts of the system. In Linux., different components are being developed by different people. For example, the kernel is developed by the Linux kernel team. The shell and core utilities are developed by the GNU project. The GUI comes from XFree86 or X.org. Demons are developed by Apache group, Samga, Bind, etc.

This whole concept is really the base of open source software movement. This is why we have distributions of Linux operating system. Different people or individuals work on different components, put them together into one package and then release it to the public as a distribution. Because of this modularity, we can create a very customized Linux operating distributions based on individual requirements. 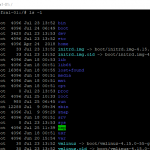